Riot Games released its first mobile game, the Auto Chess title Teamfight Tactics, in March 2020, with the title going on to generate more than 15 million downloads and approximately $27.5 million in player spending to date. It was swiftly followed by the global release of the Card Battler game Legends of Runeterra in April 2020, with the title accumulating close to 13 million installs and $16.2 million since launch. League of Legends: Wild Rift, meanwhile, a MOBA based on the hit PC title, was first released in October 2020 and has been steadily rolled out across the globe. It has been Riot’s most successful mobile game to date, racking up 46.3 million downloads and $64.7 million globally, accounting for close to 60 percent of the publisher’s mobile revenue. 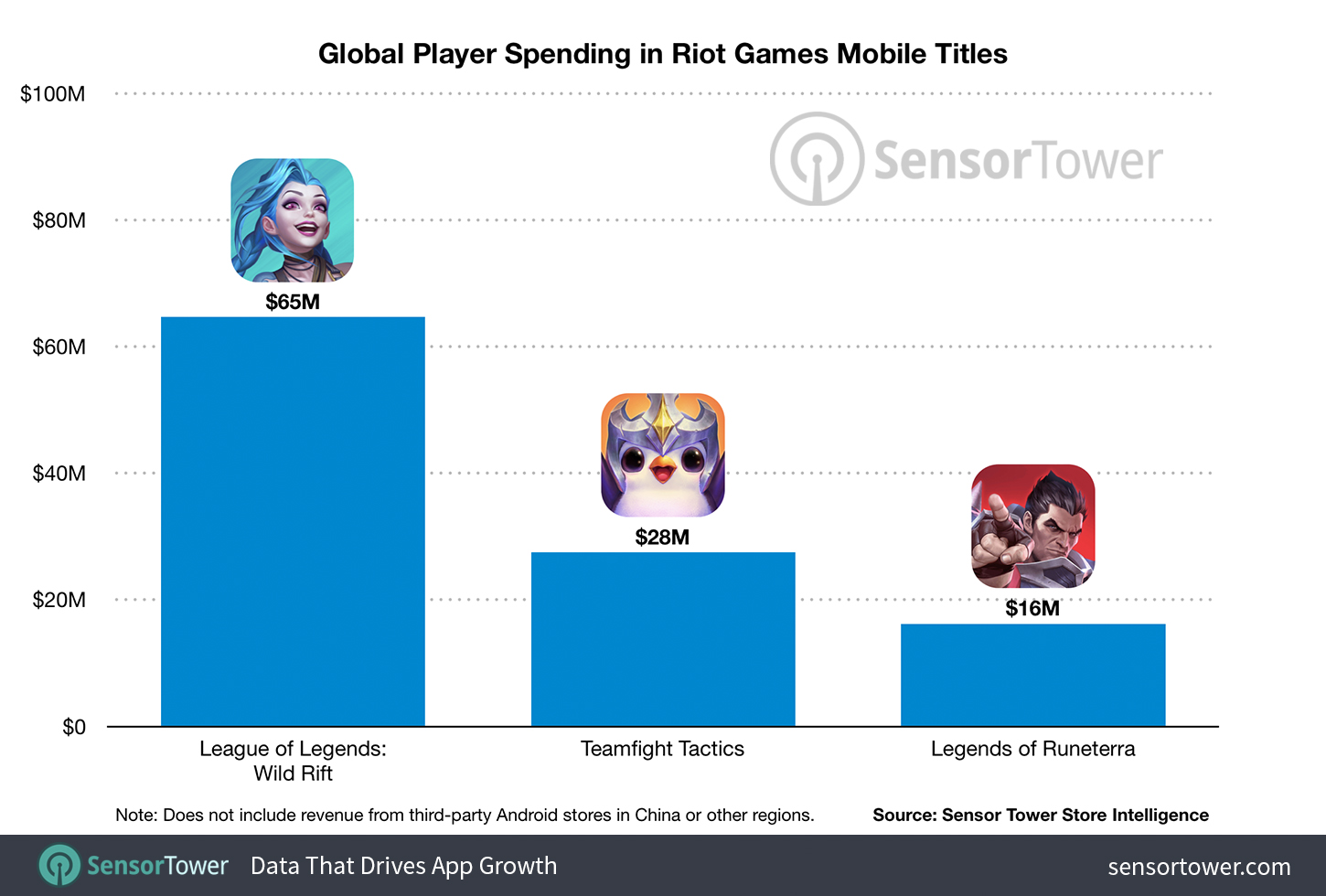 The United States accounts for the majority of revenue generated by Riot Games’ mobile catalog, picking up approximately $28 million, or about 26 percent of total player spending. South Korea, meanwhile, ranks No. 2 with 22 percent of revenue, while Brazil ranks No. 3 at 6.5 percent.

Google Play has generated the majority of revenue across Riot’s games, accounting for $63.4 million in revenue, or 59.4 percent of total player spending. The App Store, meanwhile, accounts for $44 million, or 40.6 percent.

When it comes to downloads, Brazil ranks No. 1 with 7.4 million installs, or 10 percent of the total. South Korea ranks No. 2 with 9.6 percent of downloads, while the U.S. rounds out the top three with 8.3 percent.

As with player spending, Google Play comes out on top for downloads, accumulating 48.3 million installs, or 65 percent of the total. The App Store, meanwhile, accounts for 26 million downloads, or 35 percent.

Just over 16 months into Riot Games’ first foray into mobile titles, the publisher has released three games and generated $108.4 million from player spending. The company has spent the last few years diversifying its portfolio outside of its blockbuster hit League of Legends, although that continues to be its flagship title, even on mobile. More is set to come from Riot, with League of Legends: Wild Rift due to launch in China, while its PC FPS, Valorant, is planned for a mobile release in future, joining other shooters such as Call of Duty: Mobile from Activision, in collaboration with Timi Studio, and PUBG Mobile from Tencent in making the jump to smart devices.

66% of Republicans Don’t Think Jan 6 Capitol Riot Was an Attack on the Government: Poll

Alongside Pixel 6, Google unveils Wait Times, which lists the current hold time for a customer support number, Hold for Me, Direct My Call, and more (Richard Lawler/The Verge)

Hoop it Up With NBA 2K22 on Apple Arcade