Although the average number of apps interacted with by smartphone users in the United States each month has returned nearly to pre-pandemic levels in the first half of 2021, the types of apps these consumers are regularly using have changed. Sensor Tower Usage Intelligence data reveals that the use of Business, Medical, and Finance category apps has grown the most since H1 2019 on a per-user basis.

U.S. Smartphone Users Interact with About 46 Apps Each Month

Our analysis utilized Sensor Tower Usage Intelligence along with Pew Research Center’s data on smartphone ownership in the U.S. and focused on population estimates of users aged 12 and above. According to our estimates, U.S. smartphone users who fit within these parameters used on average about 46 apps each month in the first half of 2021. This is two more than the same period in 2019 when users interacted with close to 44 apps on average. 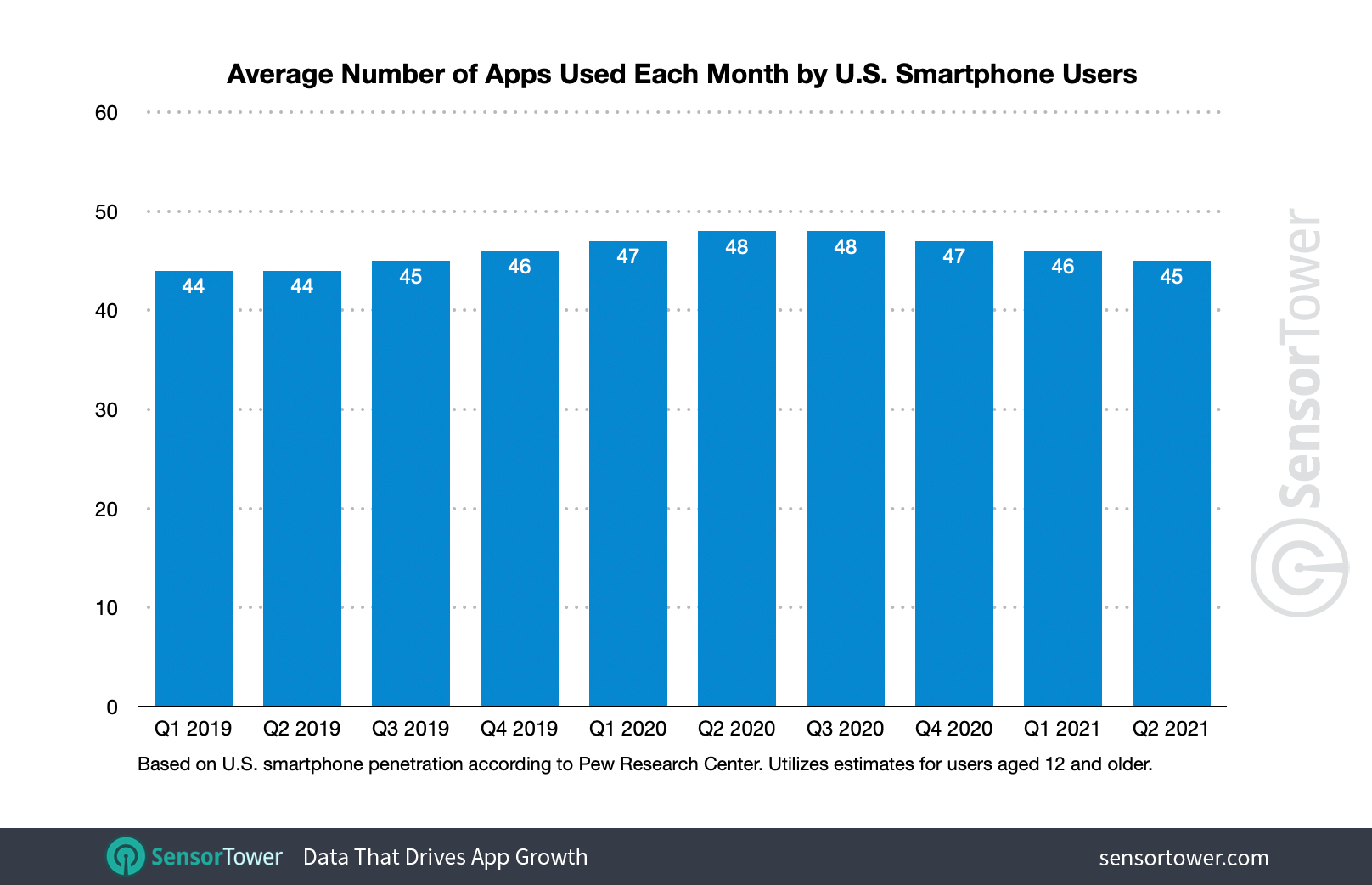 The number of apps used peaked in Q2 2020 at the onset of COVID-19 when consumers interacted with an average of nearly 48 apps each month. This uptick may be a result of consumers trying new apps as their routines were disrupted by stay-at-home orders. Mobile devices also became the locus for everything from work to education to entertainment, resulting in categories such as Business experiencing unprecedented adoption.

In H1 2020, consumers averaged about 47 distinct apps used each month, approximately three apps more than in 1H19. This figure fell in 1H21, reflecting a return to pre-pandemic habits in some senses. Changes in consumer behavior have resulted in a persistent shift in the categories of apps used, however.

Mobile Business on the Rise

In 2Q19, smartphone users in the U.S. interacted with an average of 0.71 apps from the Business category each month. Usage of apps in this category climbed 37 percent year-over-year to 0.97 per user each month in 2Q20, and another 13 percent to 1.1 per user in 2Q21. When comparing last quarter to the same period in 2019, the average number of Business category apps used per U.S. smartphone user had grown 55 percent. This is due in part to persistently elevated usage of video conferencing apps such as Zoom, as many workers continued to do their jobs remotely. 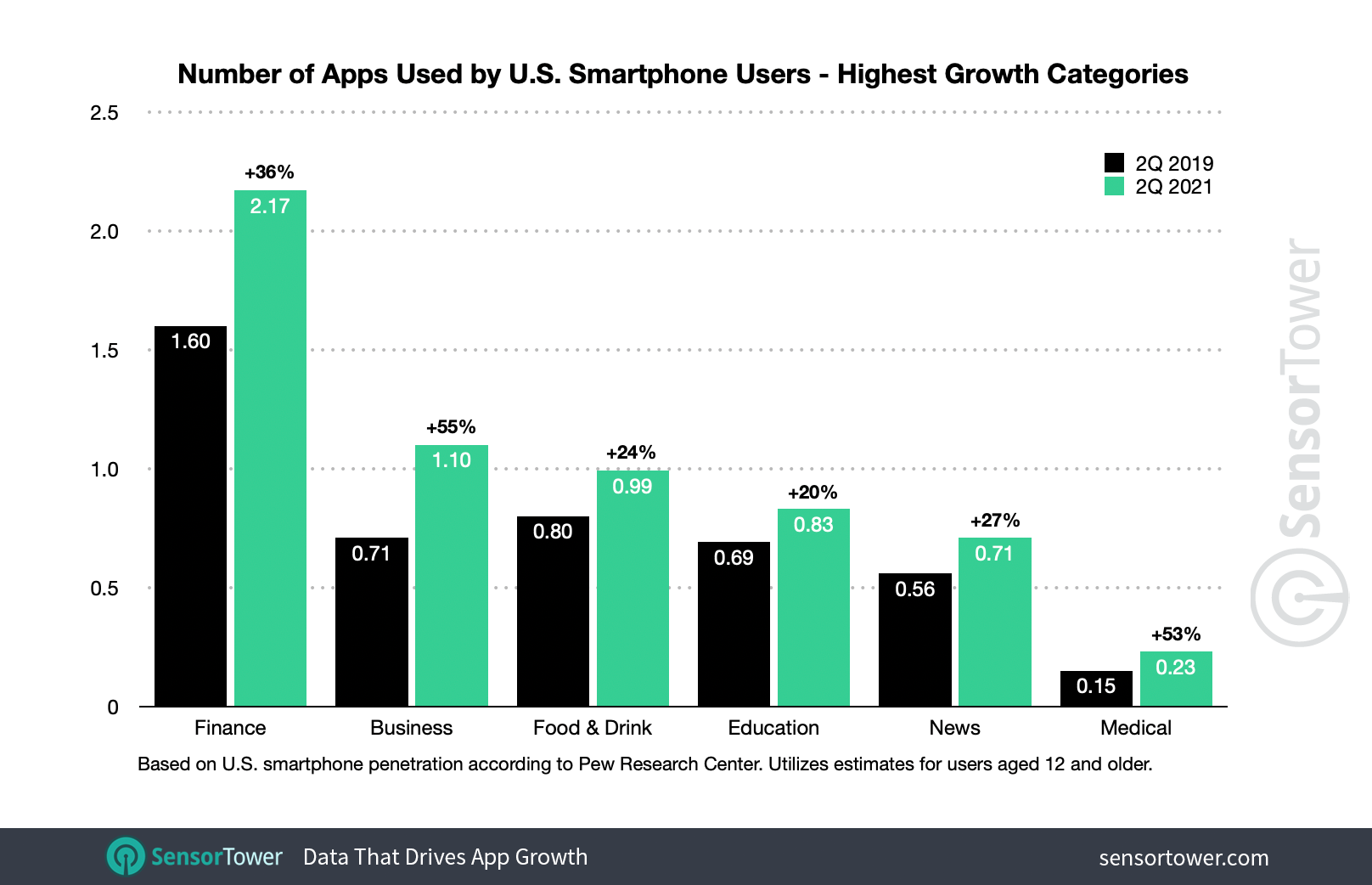 U.S. smartphone owners used an average of nearly 45 apps in June 2019, with the largest share of that belonging to mobile games. However, as usage of Business and Finance category apps has grown, the share of mobile games used has declined. In June 2021, approximately 33 percent of apps used were mobile games, down 3 points from about 36 percent during the same month in 2019 and down 4 points from 37 percent in June 2020. Despite this decline, mobile games still represent the single largest category of apps used on average each month, and the U.S. remains the largest market for consumer spending in the category. 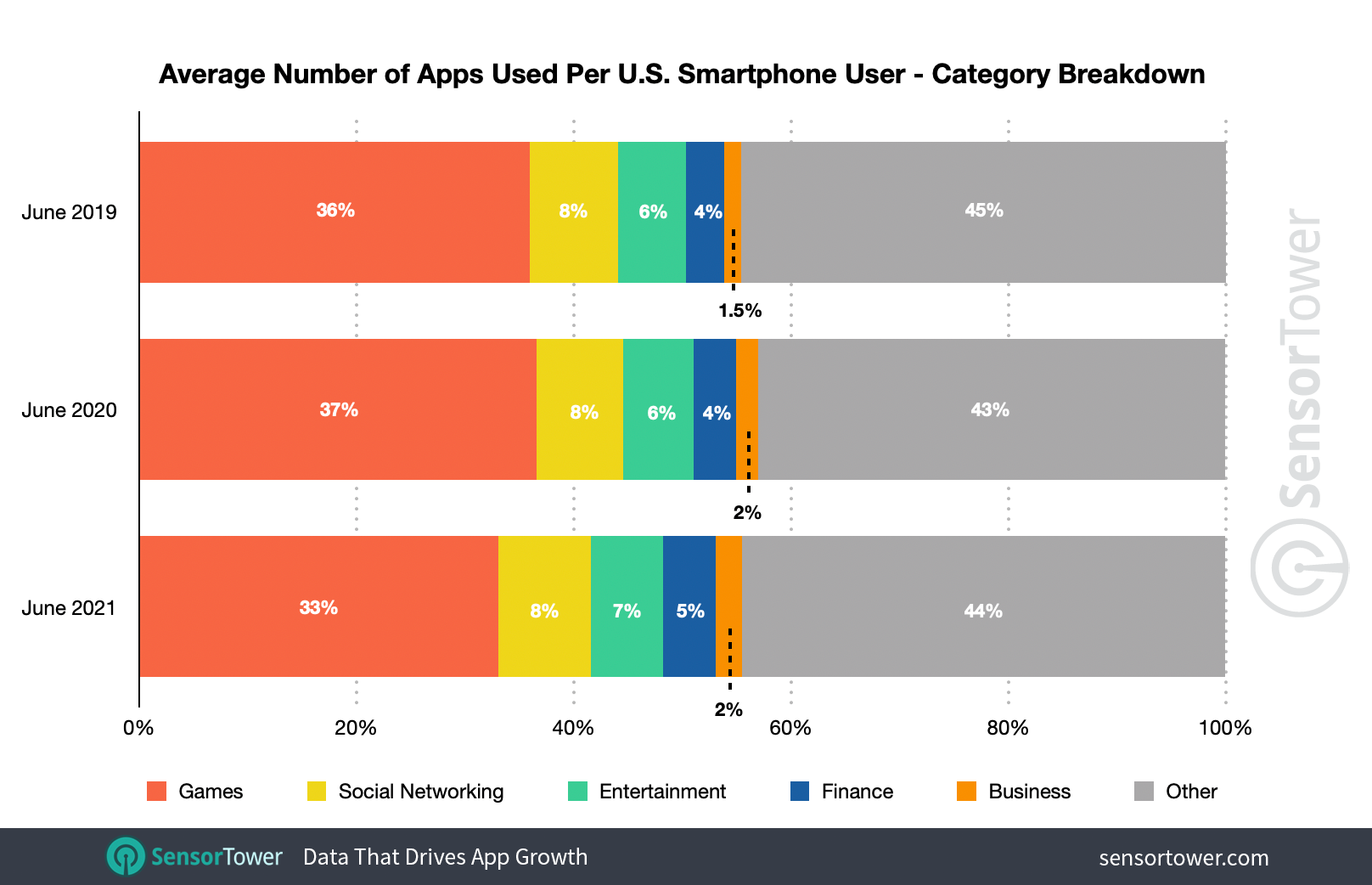 This slight decline could potentially be attributed to consumers having now found their favorite mobile games after a period of sampling many different titles to see what fit their tastes. In 2020, consumers flocked to titles such as Among Us and Genshin Impact. As consumers have to parcel out their time, they may have decided to spend it in only a handful of games rather than continuing to try new ones.

The pandemic supercharged many app categories last year, driving businesses such as national brick-and-mortar retailers to prioritize their mobile strategies. This analysis is one snapshot of how COVID-19 has impacted mobile app usage—perhaps permanently as consumers integrate a wider variety of apps into their daily routines.

Robin Healthcare, which offers an AI-powered smart speaker to record patients' talks with providers and help with administrative tasks, raises a $50M Series B (Rebecca Torrence/FierceHealthcare)