Some aspects of the global mobile app market have normalized since the onset of the COVID-19 pandemic in Q2 2020, such as first-time app installs, which grew 1.7 percent year-over-year in H1 2021, trailing the enormous 25.7 percent Y/Y growth seen in H1 2020. However, consumer spending growth has remained elevated—and so has consumer engagement with the world’s top apps. Sensor Tower’s latest report, State of App Engagement 2021, reveals that the top 500 apps globally averaged a record 91.7 million monthly active users in Q2 2021, up 8.4 percent Y/Y. Keep reading to see what else this free report surfaces regarding the latest mobile app usage and engagement trends.

Since Q1 2018, top 500 apps worldwide have grown their active user base each quarter and that accelerated last year during the onset of the COVID-19 pandemic. In Q2 2020, the top apps averaged 84.6 million monthly active users, up 18 percent Y/Y. Although Y/Y MAU growth wasn’t as pronounced in 2Q21, the trend was still upward, climbing 8.4 percent to 91.7 million. 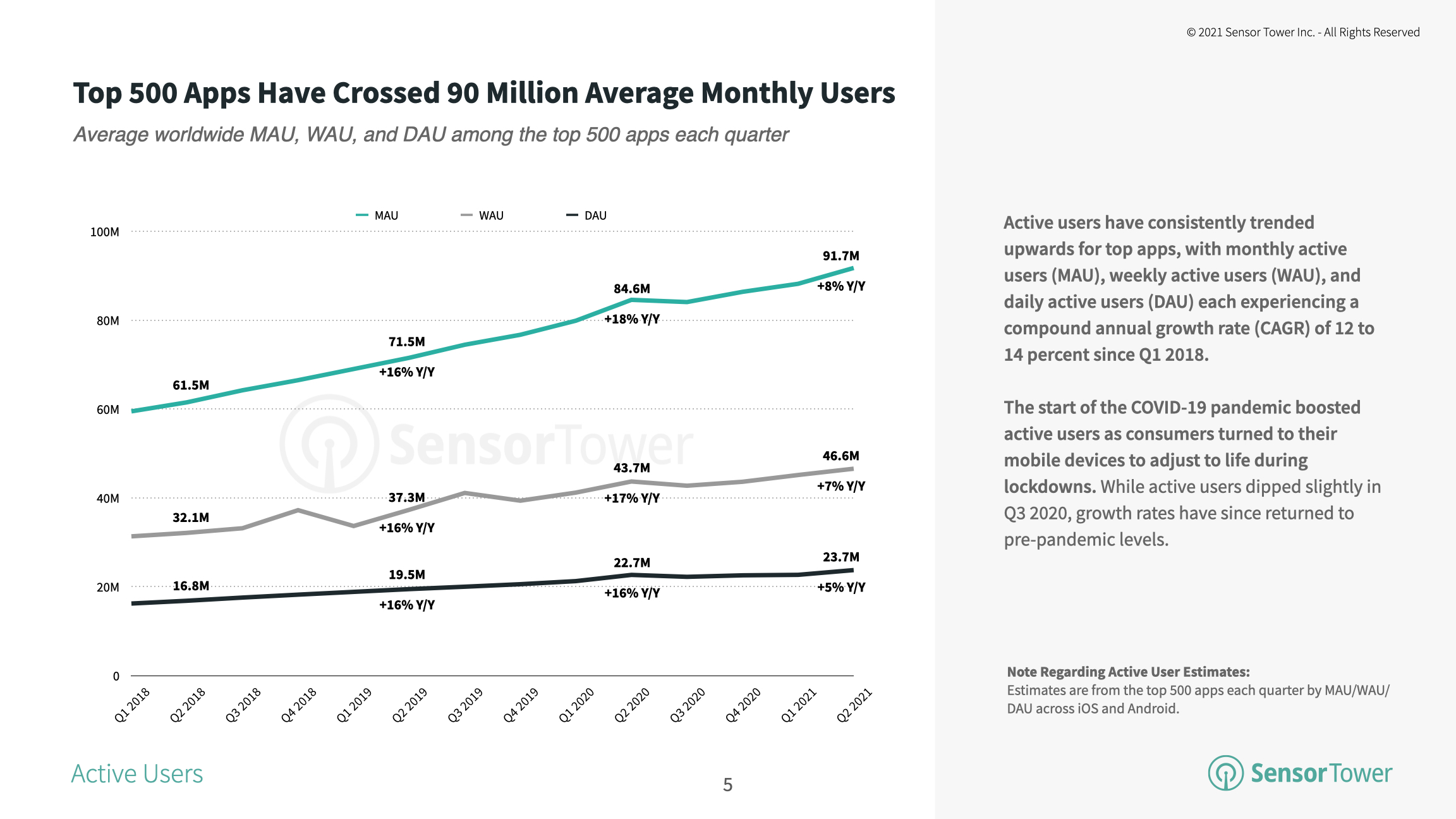 Business Apps Have the Highest CAGR for MAU

Previous Sensor Tower research revealed that Business category app adoption surged to record heights as consumers sought remote work solutions during COVID-19. Correspondingly, the average MAU of the top 100 business apps climbed in 2020 and that growth has persisted into the first half of 2021, making it the fastest growing category by active users. Compared to 1Q18, the average MAU has seen a compound annual growth rate (CAGR) of nearly 42 percent. 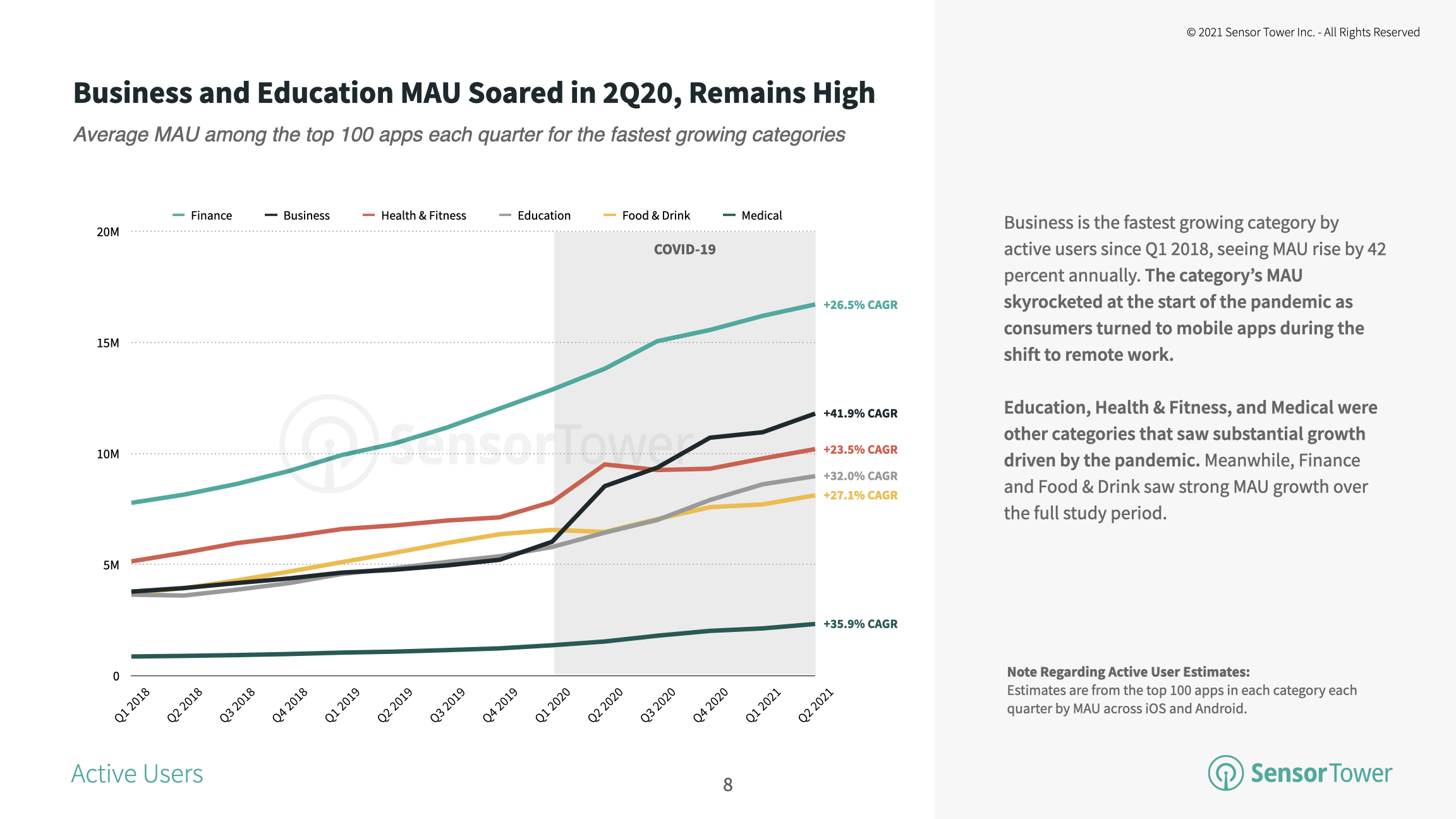 When it came to the category level, Entertainment apps commanded the greatest amount of consumers’ time in 2Q21. Users spent an average of approximately 29 minutes per day in each app among the top 100 iOS apps in the category during the study period. Social Networking apps followed, with consumers spending an average of nearly 24 minutes per day in each of the top 100. Compared to Entertainment apps, that time was spread out over more sessions of shorter durations, as users performed quick check-ins on their social channels. 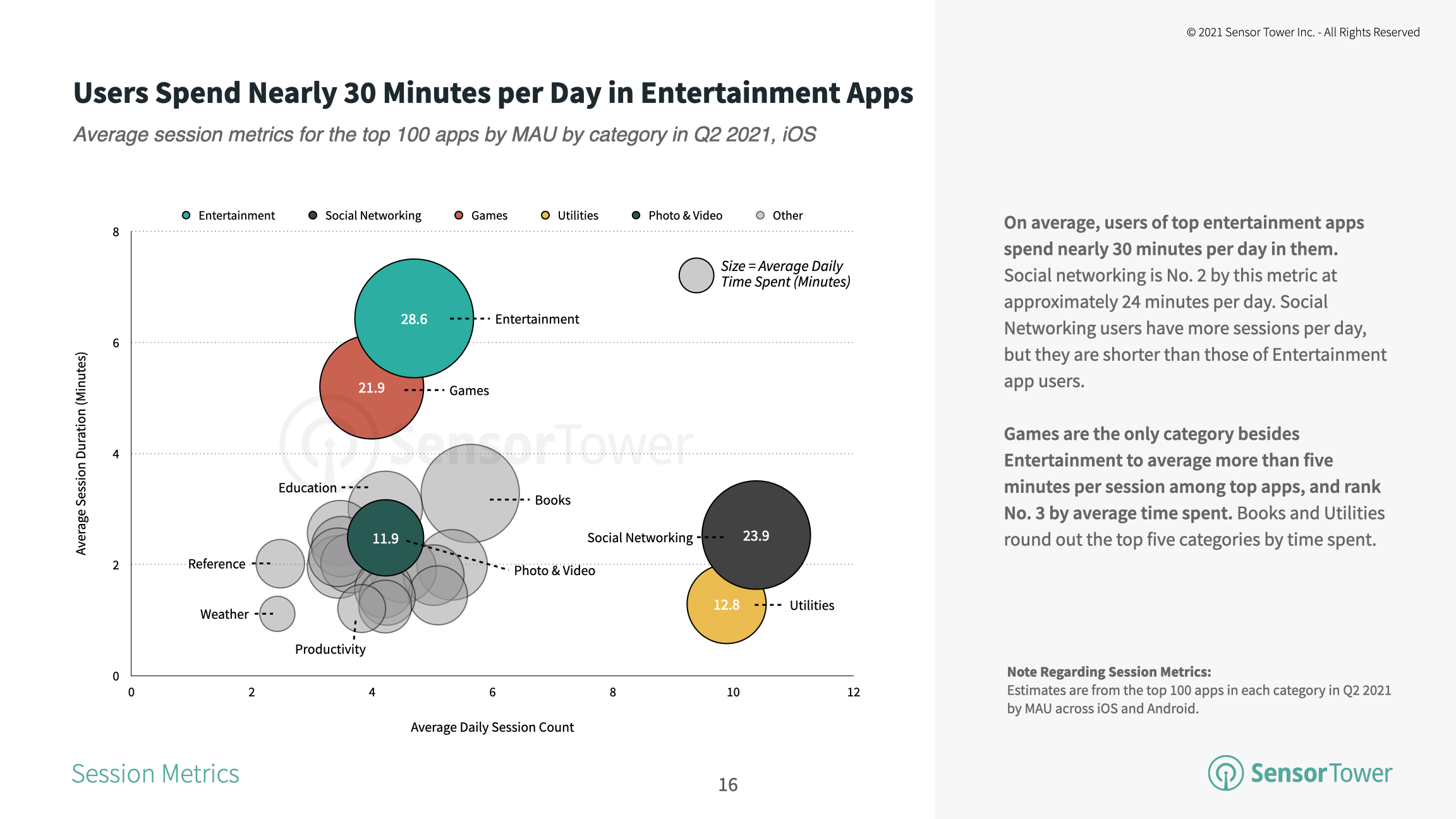 In the United States, Sensor Tower’s 2021 State of Streaming Apps Report showed that the top streaming apps have experienced elevated adoption and consumer spending since the onset of the pandemic. As subscription video on demand (SVOD) services such as Disney+ and HBO Max expand out their offerings and platforms such as Twitch maintain increased installs and active users, the trend of increased usage and time spent in these apps may very well continue.

Shooters Draw the Most Daily Active Users Among Mobile Games

Although the Hypercasual genre reigns supreme with the most monthly and weekly active users on average, mobile Shooter genre games saw more players on a daily basis. Thanks to the success of battle royale titles such as PUBG Mobile—including its variant Game For Peace on iOS in China—and Garena Free Fire, the top 50 games in the Shooter genre averaged 7.6 million daily active users in 2Q21. The genre also saw the third most WAU and the fourth most MAU. 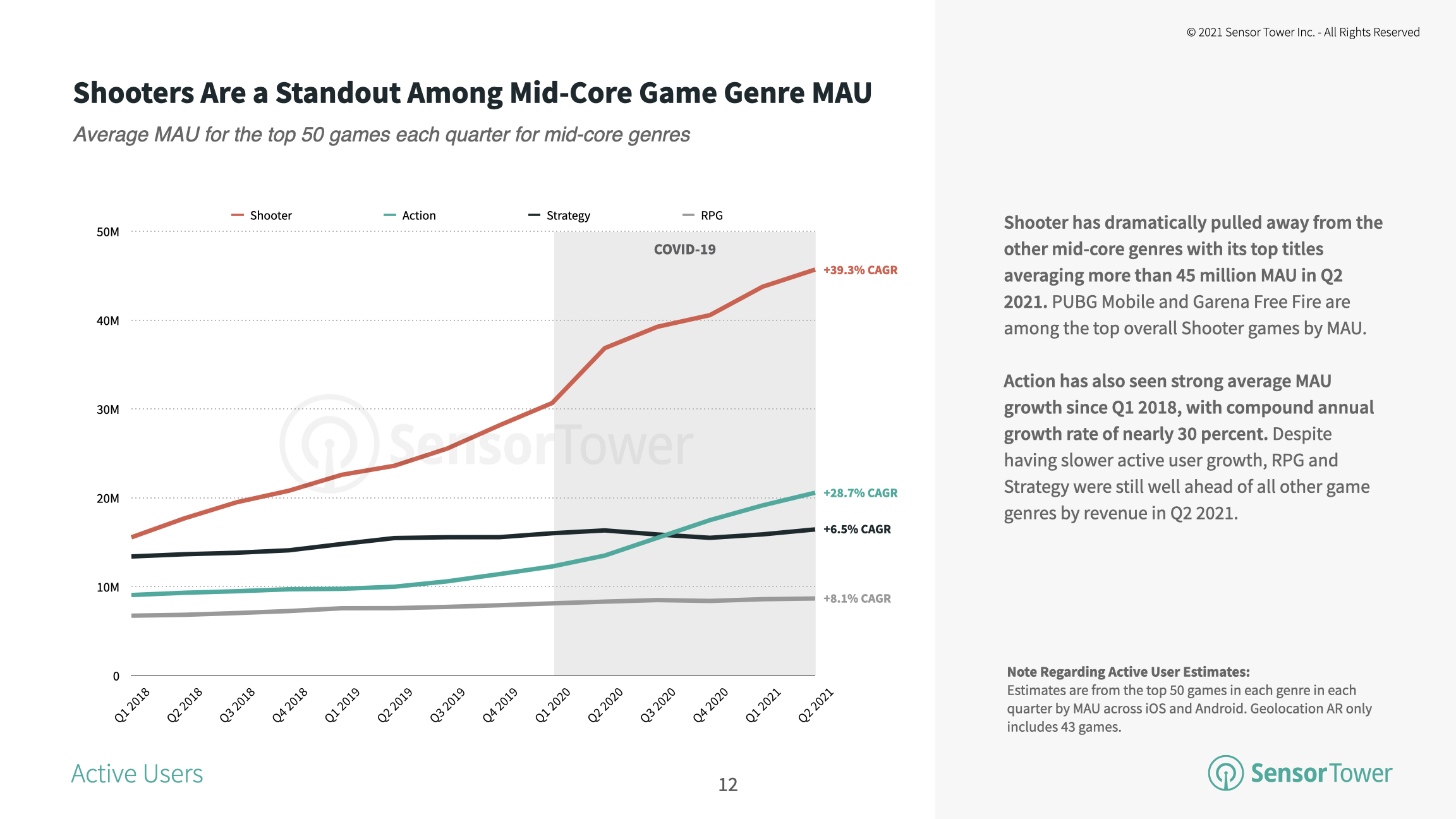 PUBG Mobile remains hugely popular; however, it’s possible that it might see a dip in DAU in China, its biggest market, following the latest government policy limiting the screen time of players younger than 18.

For more analysis from the Sensor Tower Usage Intelligence platform, including key insights into the performance of non-game categories and mobile game genres, download the complete report in PDF form below:

Adobe: US consumers spent $8.9B online on Black Friday, down from the record $9B in 2020, the first ever YoY decline (Lauren Thomas/CNBC)